Sensors are the "eyes and ears" of the military, providing tactical information and assisting in identifying and assessing threats.

Today, the modern defence world aspires to a network of connected sensors providing persistent and broad area surveillance of scenes of interest. This requirement demands collecting, disseminating, and fusing data from multiple sensors of widely varying complexity and scale - from satellite imaging to mobile phones. The ERPE works to achieve such interconnected sensing while avoiding the dangers of data overload through re-examining the entire signal processing chain from sensor to final decision.

Signal Processing is fundamental to the capability of the Defence Technology Strategy and all modern sensor weapon systems. This is identified by the development and application of signal processing techniques as a high priority in technical challenges within the MOD research agenda.

Discovering a suspicious package or unknown substance can cause an immediate disruption and rapid response from security services, often at a timely and costly process.
The ERPE has developed a novel application using pioneering sparse source separation software to instantly analyse, in real-time, the breakdown of complex chemical mixtures. Known as chemical mixture fingerprinting and quantification, this innovative software for a portable device detects new complex unknown composite hazardous materials to give an accurate description of all the chemicals used. The previous software available was only able to identify a single chemical at a time.

With this handheld device, known as a Raman spectrometer, security personnel can point a laser at a suspicious package or substance from a metre away, which then measures reflected light and beams it to a computer. The measurements then give a reading of the chemical composition and alerting the user to potential illegal, explosive or dangerous materials.

This powerful tool developed by the University Defence Research Collaboration, led by Heriot-Watt University and the University of Edinburgh, is sponsored by DSTL and discussed with industry for widespread commercial sale.

Safe eye on the World

Video tracking algorithms are fundamental to a wide range of defence and civilian applications, including automated surveillance, traffic monitoring, human-computer interaction and virtual reality.
Many previous approaches ignore the richness of video, which contains other features with the potential to dilute the security objective and threat warning.

Deep Learning is a new area of machine learning that replaces hand-crafted features with efficient algorithms. Recent ERPE research on Deep Learning has shown that complex behaviours can be robustly extracted from video - even in low-resolution surveillance data to improve pedestrian monitoring safety.  Pedestrians tend to exhibit ad-hoc obstacle avoidance behaviour, but modelling all possible motion eventualities has high model complexity. However, our work has shown the ability to detect suspicious behaviour even in a highly-populated area.

Autonomous detection and recognition of objects lying on the seabed is a task with many applications in both commercial and defence domains. A pressing challenge involves identifying known items of interest reliably and potentially anomalous or previously unseen objects.
Images formed using Synthetic Aperture Sonar (SAS) and pattern recognition techniques in mine countermeasures (MCM) or finding mine-like objects in images underpin the ERPE research in this area. Gaining progress in this task is complicated by collecting data in underwater environments (this is significantly more expensive than gathering video, audio, or radar data on land). However, the ERPE has excelled in this research area by gaining funding and data through collaboration with NATO CMRE (Centre for Maritime Research and Experimentation) and DSTL (Defence Science and Technology Laboratory). 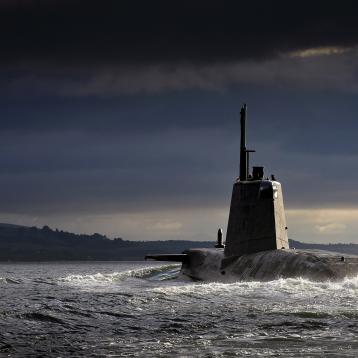